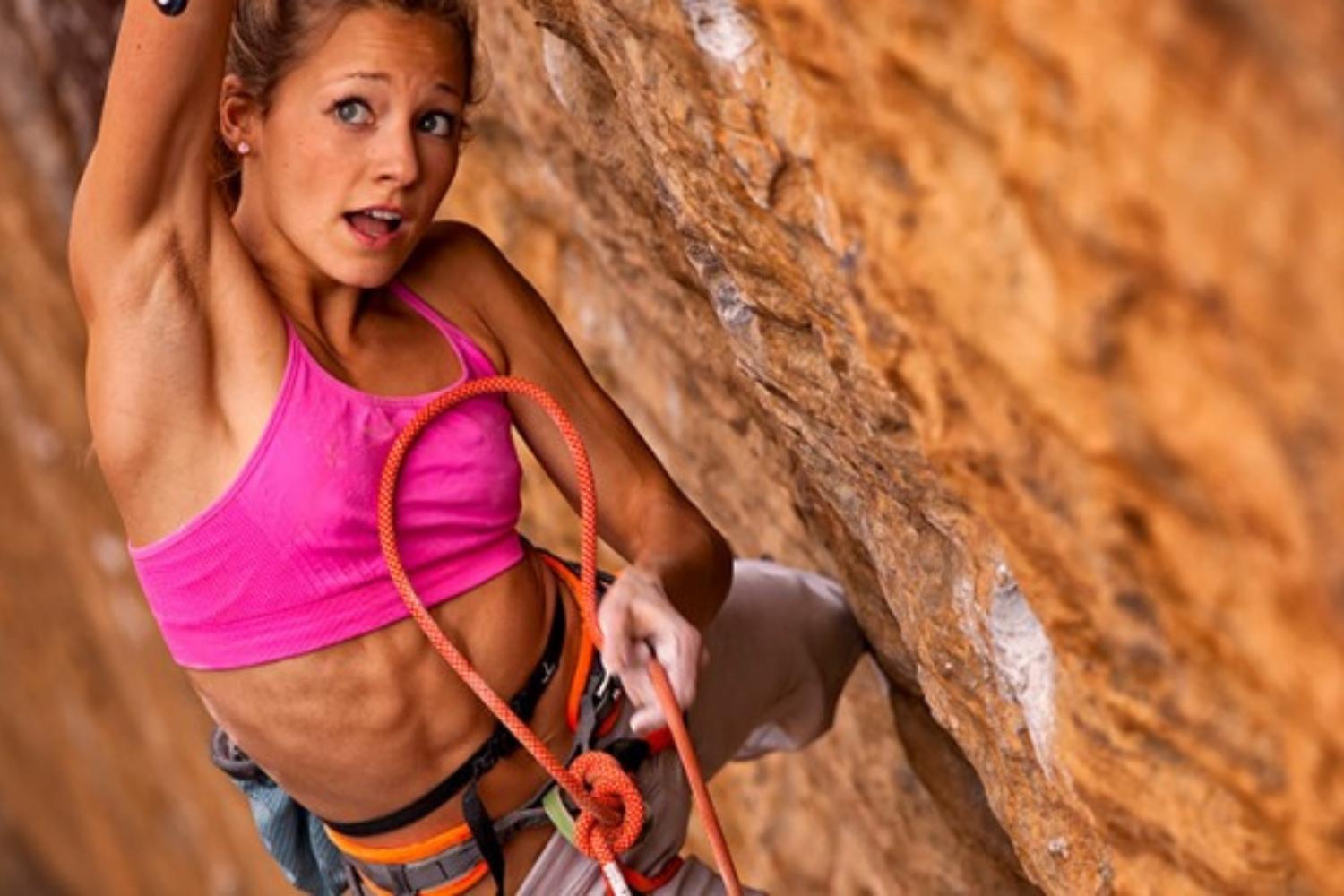 The 28-year-old took the rock climbing world by storm at an early age and has grown into one of the sport’s most famous faces, traveling the world and completing over thirty first-female ascents. However, she has not been without her controversy or conflict.

She’s led all-women climbing teams worldwide, written extensively about being a female in a predominantly male sport, and wants to be a role model for young girls looking to explore the outdoors.

Sasha DiGiulian is no stranger to any challenge, the first of which was proving people wrong. She has done so her entire life. The 28-year-old took the rock climbing world by storm at an early age and has grown into one of the sport’s most famous faces, traveling the world and completing over thirty first-female ascents. However, she has not been without her controversy or conflict.

Throughout her career, DiGiulian has changed the narrative of what a professional climber is “supposed to look like.” “Climbing as a sport, traditionally, is a White male’s club, and I’ve experienced that in my career. I know that we lack diversity in many ways,” she tells CNN Sport.

“As a woman, success in my career was often reattributed to climbing something with a male being present or doing something and that achievement being negated by my weight, my circumstance, or people making assumptions of my background.”

DiGiulian has spoken out about her experiences of being a woman in the sport and the bullying that goes along with it, writing a lengthy Instagram post in 2018 after she said she was subject to bullying from fellow climber Joe Kinder.

Kinder told CNN that he felt “gravely misrepresented” and said that “public shaming” can cause serious mental health problems. He issued an apology and went on to say how the interaction impacted his life.

“I’ll never defend my mistake as there is no excuse for my actions. I own it and have learned a hard lesson. It was offensive and hurtful and cost me my career and everything that I had built,” he said in a statement.

DiGiulian says she has been subject to snide comments and remarks for her career choice for years. An interaction she recalled with an alpinist when completing a first female ascent on the 5,900 ft north face of the Eiger (a mountain in Switzerland with one of the most technically challenging climbs in the Alps) continues to invade her thoughts when she doubts herself.

“I won’t say his name, but it comes to the tongue, he said ‘little girls don’t belong on the Eiger’ and just little cuts like that that happen throughout your experiences,” she says. “It doesn’t help, and it doesn’t encourage more people like me to feel comfortable in the sport.” 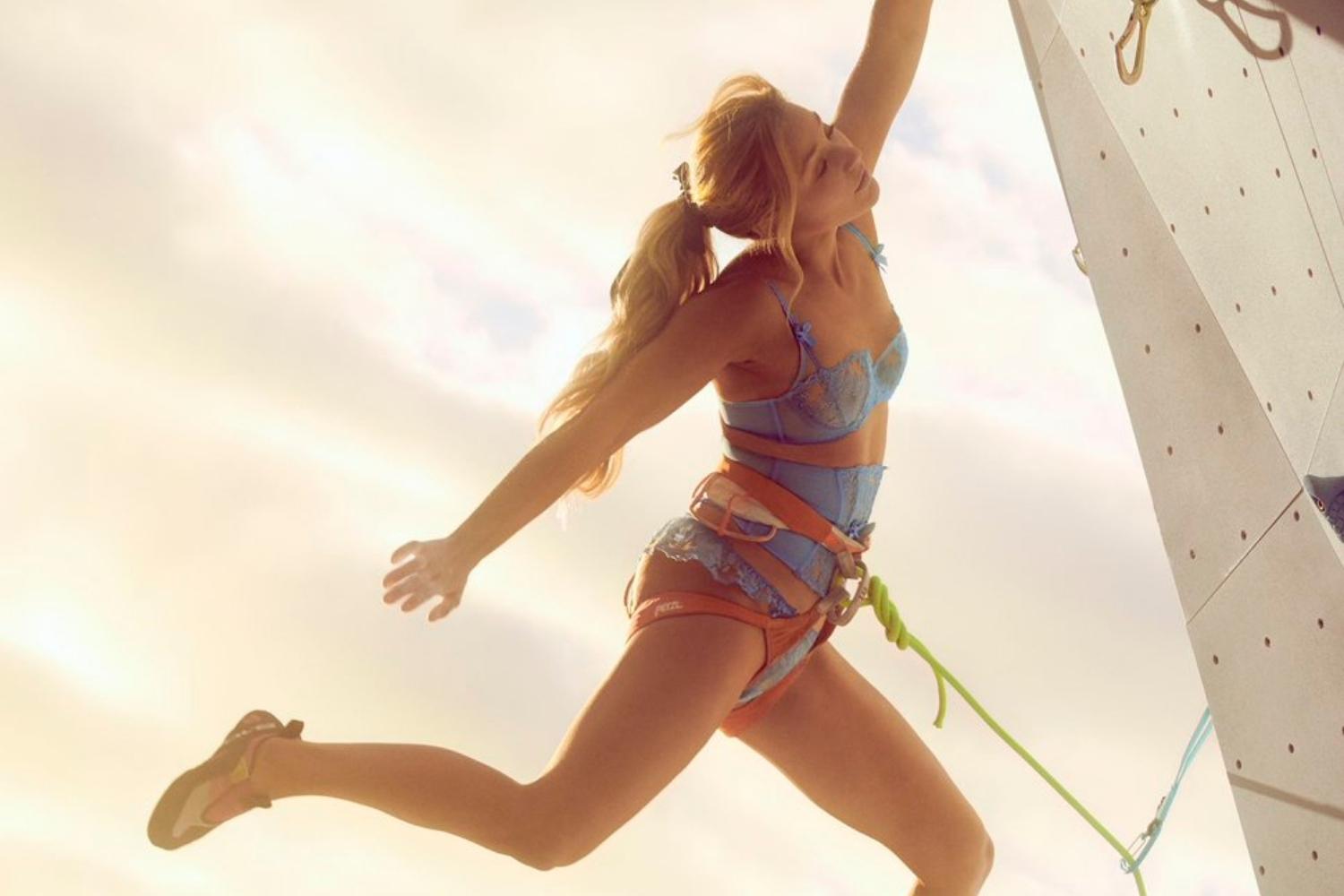 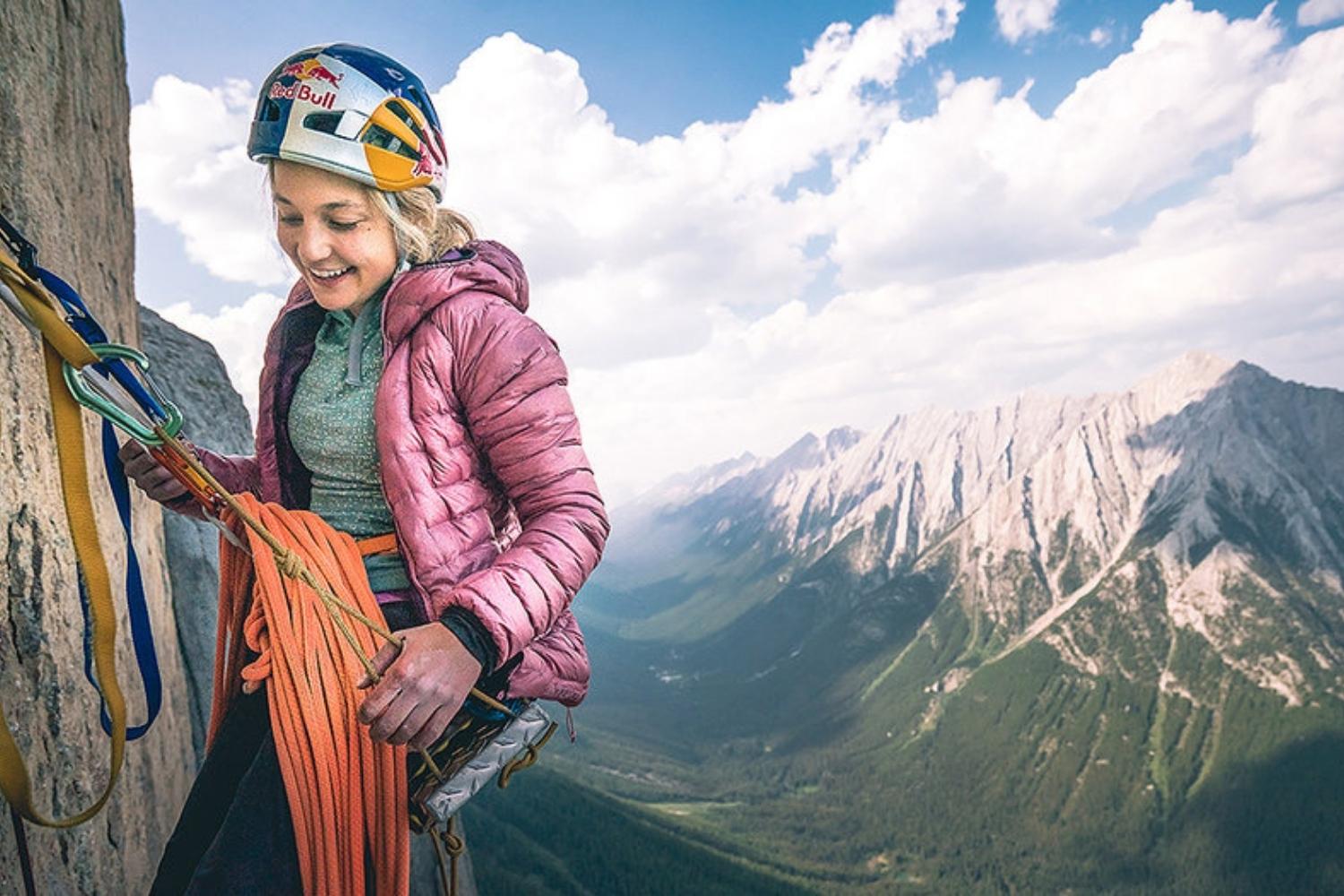 These experiences haven’t hurt her drive for the sport. If anything, it motivated her. With a significant and growing social media following (463,000 followers on Instagram), DiGiulian uses her platform to raise awareness of such issues, becoming a voice for women everywhere trying to break into “Ol boy clubs.”

She’s led all-women climbing teams worldwide, written extensively about being a female in a predominantly male sport, and wants to be a role model for young girls looking to explore the outdoors. She is doing what Wonder Woman did for superheroes, only in real life.

DiGiulian is particularly passionate about body confidence. This year she took part in an Agent Provocateur advertising campaign where she was filmed climbing in lingerie, describing it as an experience that was “out of my comfort zone.”

The campaign featured three other female athletes and received criticism for the “gratuitous sexualization of” female athletes. DiGiulian says those critics missed the point. “I would say that at the heart of femininity is choice and ownership of your body,” she says.

“All four of us athletes chose to be a part of that campaign because it was an empowering opportunity to really be proud of our sports and of what our bodies look like. I’ve gone through my own bouts with disordered eating and body confidence through excelling at my sport. I get wide shoulders and larger biceps but [I’ve learned] to embrace my body as it is, with the athletic build, because my body provides the tools to be able to excel.”

Two climbers, Aaron Livingston and Nolan Smythe were scouting ahead of her planned arrival to climb Logical Progression (a  2,800-foot 5.13 in Basaseachi, Chihuahua, Mexico) early April 2020. They were climbing the route themselves and fixing some lines for the expedition’s photographer, Savannah Cummins, Smythe’s girlfriend. Climbing pitch 14 during the night (something that wasn’t uncommon due to the intense heat of the day turning the rockface dangerously hot), Smythe fell to his death when the ledge he was standing on gave way, and the rockfall severed his rope.

2020 was a trial for all; the pandemic challenged everyone, but some more than others. DiGiulian’s 2020 was trying her on three fronts. On top of the pandemic, she was working through the trauma of Smythe’s death and complex feelings of guilt for having been part of the reason he was on that wall. Also, in 2020 she learned that the body that had propelled her to three National Championships in sport climbing was betraying her; the chronic hip pain she had dealt with for years turned out to be full-on degeneration of her joints.

“I had shredded through my labrums in both my left and right hips. I had been feeling a sharp, deep throb in my hip joint and instability to the point that it felt like my femur head was popping out of the socket—which was quite nearly what was happening. Because of my anatomy and the grind that I have put on my body over 22 years of climbing, the issue got worse and worse,” DiGiulian says.

Her options were simple, grit through the pain and get double hip replacements in a few months (by which time the bones in her joints would be rubbing directly against one another, the cartilage having shredded away) or sign up for a series of grueling surgeries over the next year to reconstruct her hips and avoid said replacements.

The trip where Smythe had his fatal flaw was scheduled as her last hoorah before electing to endure the series of surgeries and retaining some hope of climbing again. “Having total hip replacement was going to be a career-ending decision, whereas having hip reconstruction was at least rolling the dice on possibly coming back to a level of mobility that I could climb with. Both options sent me into a dizzying emotional spiral in which it felt like my whole life as I knew it was crashing down hard.” 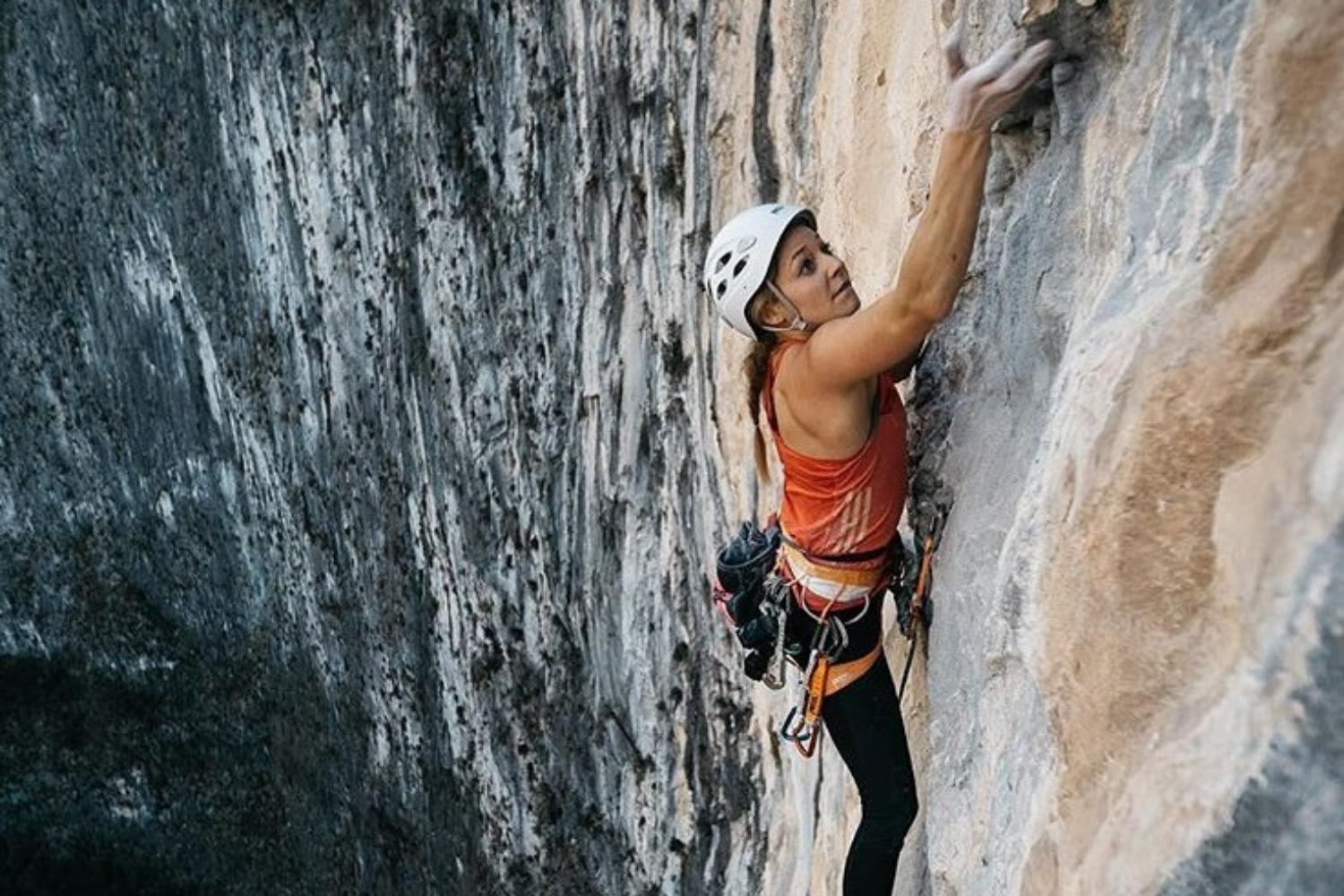